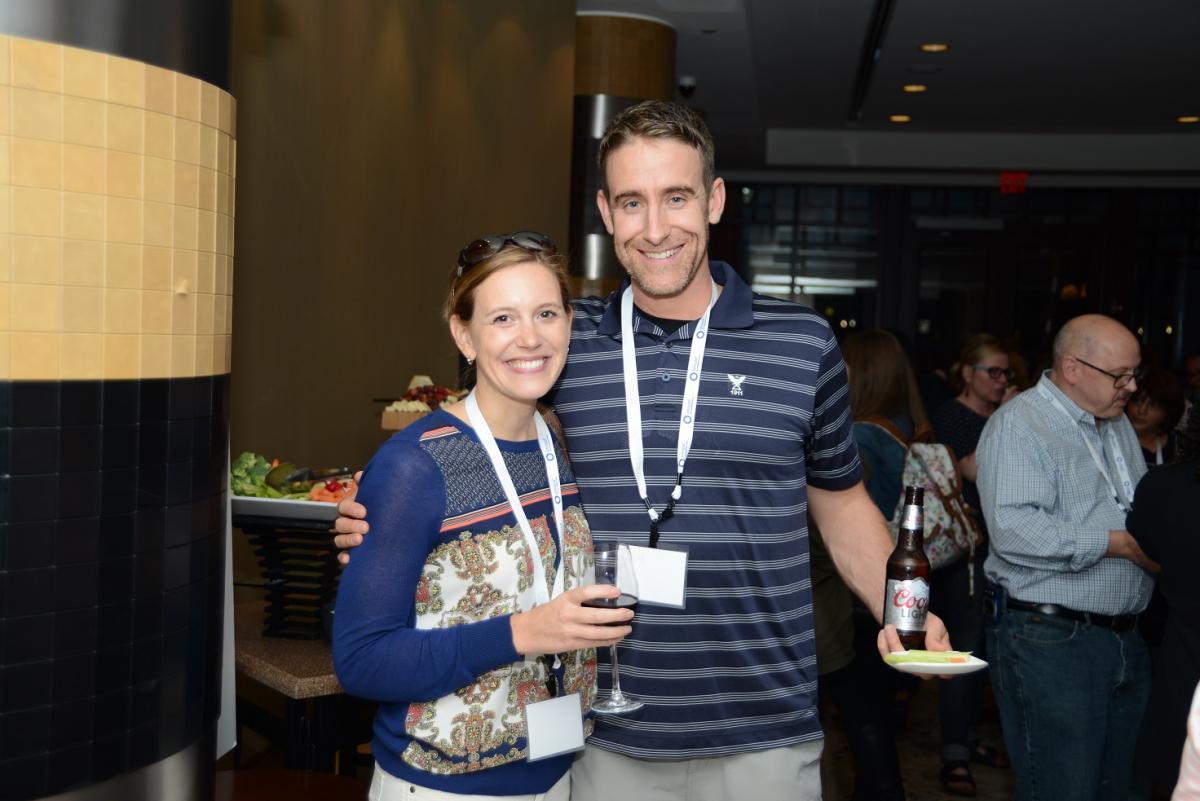 She Said: My journey with diabetes started exactly 5 years ago when I was diagnosed with gestational diabetes while pregnant with our 2nd child.  Looking back, it was actually this first diagnosis that was the most upsetting to me. I remember driving to the mandatory diabetes education session at our local hospital and sobbing;  I was scared about the uncertainty of what was to come and what this meant for me and my unborn child, and I felt overwhelmed by one more thing to take care of as I was already stressed caring for our 3 year old son and working part-time as a social worker.  I knew absolutely nothing about diabetes at the time; no one in my family had it, and I didn’t know anyone with it. I learned during that session how to manage it during my pregnancy, but also that I would have a higher risk for developing type 2 diabetes in the years to come.

He Said: Most days, we’d do it all over again…. have the second kid, that is.

She Said: Fast forward two years, and I was seeing a highly respected endocrinologist in DC.  My A1C had been creeping up, and I was officially diagnosed as having type 2 diabetes.  The doctor and dietician at the clinic told me to change my diet and exercise, and to lose 10 lbs.  I worked very hard to do this while caring for two young children; I joined a rigorous exercise program at a gym, consulted with a diabetic dietician, and was successful in meeting these goals.  But my A1C went up. The doctor was baffled, and said I was an “anomaly” and they couldn’t figure me out.  I asked if I could be type 1 and they said no because it had progressed from gestational, it was type 2.

He Said:  She looked like someone from American Ninja Warrior (think Christel) when we left DC.

She Said:  It wasn’t until I was admitted to the hospital in June, 2016 that I was diagnosed with type 1 or LADA. We had recently moved for the third time in 2 years, and I was under an enormous amount of stress.  I had gotten sick just before moving.  All the red flags were there, but I was exhausted and oblivious, just plowing through the day in survival mode after a move.  I had no idea how sick I was.

He Said:  After several days of unpacking Leah found her monitor and tested a couple of times in a row.  She asked me to come test my blood sugar because she thought her machine must be broken with repeat scores in the 400s.  I took my reading and we got in the car and went to the hospital - not where we wanted to spend our 11th wedding anniversary.

She Said: Since being diagnosed with type 1 I have heard countless stories just like mine. Of gestational progressing to type 1.  Yet, there is so much misinformation in the medical community.  The social worker in me wants to advocate for better care, but besides calling my previous doctors to let them know what had happened, I didn’t know where to go.  And, to be honest, it took me about a year to just physically recover and then emotionally and intellectually process the diagnosis and what is to come.  Also, perhaps because the diagnosis had taken years to develop and kept changing, I took my time over the past 16 months to come to terms with my type 1 diagnosis, and the fact that I have a lifelong chronic illness that isn’t going away.

He Said:  I admire how she has dealt with the diagnosis and has focused on addressing her health and well-being.

She Said: The timing of the DiabetesSisters Weekend for Women conference was such a blessing; I was ready to learn more about my new diagnosis, and to accept it and connect with others.  I think part of me has been in denial, and attending DiabetesSisters was my way of making the effort to fully accept it, and hopefully embrace it. The conference was an important part in taking that next step on my journey, both for me and my smoking hot husband who attended with me.  When we arrived, I was comforted to meet both new attendees and alums.  Everyone I met was extremely welcoming and warm.  I learned a lot in the sessions, but in the end, it was the peer support that meant the most to me.  Those “me too” moments.  And, I should know this being a social worker, right?  But, years ago in graduate school, I could not fully appreciate the value of the group dynamic----The profound effect talking to someone “in the same boat” can have on a person’s life.  And, I was most blown away by the alums who have returned year after year, to share and help those who are just beginning their journeys.  It reminded me of one of my favorite quotes: “I love when people that have been through hell walk out of the flames carrying buckets of water for those still consumed by the fire.” --  Stephanie Sparkles

He Said:  I came to Washington with Leah for this conference because I love her and care about her health.  To be honest though, I was worried about being perceived as a poser as a non-diabetic man.  Everyone really made me feel welcome, I learned a lot and had an awesome time.  I left the weekend assured that we will be able to handle whatever diabetes throws at us.

She Said:  I can honestly say, in one weekend, DiabetesSisters had a profound impact on my life, and how I live with this disease.  I don’t feel alone anymore, but feel supported, valued and welcomed. Thank you DiabetesSisters; I’m forever indebted and look forward to giving back to this community for years to come!

Submitted by Leah and Scott Mayne