I live in Pumpkin Center; it’s on the edge of Bakersfield, CA. If you’ve ever been out this way then you know it’s hot. In the summers, it’s very hot!

In August, one of the hottest months of the year, (normally every day over 100, most around 110 degrees) school resumed. I was an aide in the deaf special ed. class. I was drinking eight-ten 28 oz. bottles of water a day. I refilled my water bottle before I left for work, when I arrived at work, between classes, during breaks and at lunch. I filled it again for the ride home, and when I got home. But, it was hot.

I was peeing, all day long. Pretty much, every time I filled my water bottle. Before work, between classes, during breaks, etc. you get the picture. But it was hot, and I was drinking so much water. Of course, I had to pee. I was tired. Not just a little tired, I was exhausted, all of the time. But it was hot, and I was outside in the heat. I was working full-time, three jobs, and going to college. Throw in some volunteer work, and of course I was exhausted. Who wouldn’t be? I was thirsty, really, really thirsty. Okay, that didn’t make much sense, because I was drinking plenty of water. But, it was hot. I lost weight.  I lost over forty pounds, I was so happy with myself. All I did was quit bringing desserts for lunch at work. Worked like a charm!

Oh, and I needed longer arms, or stronger reading glasses. I was over forty though, and that was to be expected, right?

This continued for three months, I really don’t know how I kept putting one foot in front of the other. Then it was December and I had an appointment with my primary, just a general physical. Labs were drawn the week before, no big deal. I do this every year.

Except this time, it was different. The doc came in, sat down, got very serious looking, and said; “I have bad news.”  I took a deep breath, my heart missed a beat or two, and dozens of things that could be bad news went swirling through my head. I held my breath, and he continued with; “ You have diabetes.”

Diabetes. That’s it. That’s all. At least it’s not cancer. I can live with diabetes. My panic turned to relief.  He gave me some prescriptions, showed me some numbers on some papers that didn’t really mean anything to me. He told me I could not eat bread or potatoes anymore. After that I went to a little closet with an old television and an even older vhs tape, I think it may have been recorded in the fifties. I know it was about diabetes, I don’t remember any of it. By then I was in tears, scared, alone, and probably in shock. It was a short video; five to eight minutes later a nurse came in and showed me how to test my blood sugar.

I was sent home with my very own blood glucose meter, test strips and sharp things I couldn’t remember the name of.

In the parking lot I called my wife, through tears I told her I was diabetic, I think I was shaking a bit by then.  Any relief I had felt was replaced by fear and the knowledge that I had a lot of learning to do. If my introduction to diabetes was any indicator, I was going to be doing all of this learning on my own.

My life was forever changed in the summer of 2011. 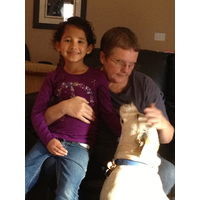 Username:
Lori-Renee
Gender:
female
Diabetes Type:
Type 2
Diabetes Treatment:
Oral medications
Occupation:
Travel Agent
Number of Children:
6
City:
Pumpkin Center
Country:
United States
Email:
kerndsisters@gmail.com
About Me:
I am a happily married lesbian with three grown sons, three adopted sons, two granddaughters, two grandsons and three four legged kids. I am a travel agent, a wedding officiant, I am attending college, I am a part-time actress in local community theaters, and a PODS leader. I love the sounds and beauty of the ocean, rivers and lakes; and I think mountains are magnificent. Life is Good.