Today marks the beginning of my third trimester-28 weeks! Thankfully, the second trimester wasn’t too bad.  During the first trimester, I remember wondering why anyone would have more than one baby because it was pretty rough but then the second trimester made me completely forget my woes and I told my husband I was ready to have ten kids (he said he was fine with one or two).  My husband and I marked the end of my second trimester with a trip to New York City.

My husband was in a wedding in Long Island last weekend so we decided to make a week of it and go to New York City for five days leading up to the wedding weekend.  I was very nervous about my blood sugars and baby leading up to the trip.  Insulin resistance started to kick in about a week or two before the trip.  I was working with my CDE (Certified Diabetes Educator) to try to get my blood sugars under control and as a result, I was tweaking my insulin to carb ratios and basal rates.  I was also nervous about all the walking we would be doing in NYC since I’m pretty inactive at home (minus the trip to the pool to swim laps three times per week) and my belly is getting huge!

We left on Monday and it was about a 7-hour drive from Virginia up to NYC.  My blood sugars did well the majority of the time until we stopped at Burger King for lunch and my blood sugars shot up.  It is hard for me to travel because I always under-estimate the amount of carbs in French fries, so I usually try to avoid them.  We got to NYC in the afternoon and after checking into our hotel, did a ton of walking around.  This helped my blood sugars get back down to a reasonable level.

One of the smartest things I did for this trip was packing breakfast for every day we were gone, instead of going out to eat for breakfast every morning.  I ate what I normally eat for breakfast and it helped to keep my blood sugars in check.  However, we did a ton of walking every day so I would notice a drop in my blood sugars around lunchtime.  Tuesday, Wednesday and Thursday I noticed by around 11AM, I was dropping low.  This resulted in me eating more carbs than I probably should have at lunchtime and then going high every afternoon, despite the additional walking.  I was able to come down from my mid-afternoon highs by dinnertime but again the eating out thing got to me.

I am great at carb counting when it’s something that I eat everyday at home.  For example, I weigh my carrots and apples out before eating them.  I read the food labels carefully.  But when I am eating out, I find it really hard to guess at how many carbs I am eating even when I try to eat “healthy” foods.  I did OK carb counting Tuesday night, but Wednesday and Thursday were harder for me.  All I could do was correct and move on and usually overnight, I came down to a good number.

The wedding weekend was a lot tougher.  During the day, I was fine but Friday night we had the rehearsal dinner and Saturday night was the wedding.  Both events had a TON of amazing food including dessert and I gave in to my pregnancy cravings and indulged more than I should have.  My blood sugar hovered in the high range both nights.  Going into Sunday I stayed high consistently throughout the day, even on the car ride home.  I think it’s possible I ate so much on Saturday night that it was still sitting with me on Sunday (there’s probably no medical basis for this, but I was at a loss to explain why I stayed high all day).

Despite my blood sugars being harder to control than normal, I think overall baby did well.  He was really quiet during the day when we were out moving about but whenever we came back to the hotel to rest, he was quite active.  Since I was approaching week 28, my belly was getting really big.  It started to hurt my back after a while carrying him but it did have some perks too.  A few times I encountered long bathroom lines and women were so sweet to let me get to the front of the line (although I only accepted this offer once out of the four times).  I also received a lot of smiles from people and I always had a seat when I was riding the subway.

It was such a fun trip but I’m happy to be back home now and getting back to my normal food and workout schedules and getting my blood sugars back under control.  While we were on vacation, I didn’t focus on my blood sugars the entire time, we also did a lot of sightseeing.  I saw Times Square, Rockefeller Center, FAO Schwarz and the big piano, the Wall Street bull, and the 9-11 Memorial.  We walked across the Brooklyn Bridge, took in a Broadway show, Phantom of the Opera and took a romantic carriage ride through Central Park.  It was a ton of walking and I’m not going to lie, my back was killing me by the end of the trip from all the extra weight I was carrying in my belly but it was so much fun, it was worth it!  I’m planning on posting some photos of the trip on my blog, www.below-seven.com if you want to check them out. 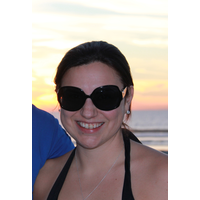