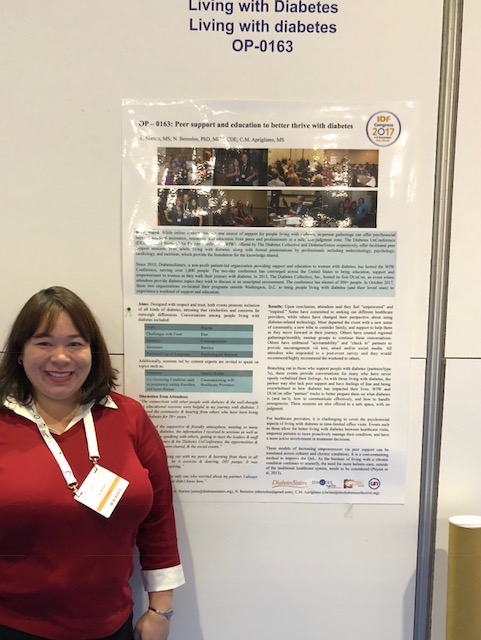 Last month, I had the privilege to travel to Abu Dhabi to participate in the 2017 International Diabetes Federation (IDF) Congress. While I had attended previously (2015 IDF in Vancouver), this was my first experience presenting. Along with Nicole Bereolos, PhD, MPH, CDE, and Christel Marchand Aprigliano, Founder of the Diabetes Collective (and Diabetes UnConference), we presented our abstract and poster, Peer support and education to better thrive with diabetes.

With a total of nearly 8,000 participants from over 180 countries, I spent most of my three days of conferencing in sessions in the Living with Diabetes stream. This stream, or track, focused on the complexities of life with diabetes, that which DiabetesSisters spends much time developing programs and services. For patient organizations, this stream is integral to allow clinicians to better understand the psychosocial elements of life with diabetes, reinforcing that diabetes is not purely a numbers game, and that many other facets can affect – and even enhance – living and thriving with diabetes.

I spent time with representatives of Blue Circle Voices, specifically Phyllissa Deroze and Riva Greenberg, in discussing ways we can involve the United States in global initiatives. Stay tuned for more on that in the coming months!

Special notation and congratulations should be given to Manny Hernandez (United States) and Renza Scibilia (Australia) who worked tirelessly as Leads to the Living with Diabetes stream; their efforts were noted and included focus on empowering patients, overcoming stigma and misconceptions, and the importance of peer support.

Particular sessions that stood out for me, and the work we do at DiabetesSisters, included a debate on diabetes technology, We’re not waiting vs. why are we waiting – led by Annabel Astle (United Kingdom) and Dana Lewis (United States). Both views provided greater understanding on the DIY-movements many with type 1 diabetes have embarked upon in creating their own loop systems with insulin pumps. For me, it provided a more solid foundation on which to have discussions with many of you, many who still have questions about these systems and often ask about the pros/cons.

Another notable session was Language matters: when speaking to and about people with diabetes. With viewpoints from Jane Speight (Australia), M. Shi (China), and Betsy Rodriguez (United States), it provided a snapshot of ways language affects the perception of diabetes. For example, Ms. Shi discussed how the Chinese characters of diabetes mean “sugar urine disease” and automatically conjure a negative connotation in discussions (another delegate confirmed this is the same in Japan). Ms. Rodriguez’s presentation on using culturally appropriate words when speaking about diabetes to patients stressed proper outreach, allowing patients to feel a partnership when seeing clinicians. This was extremely relevant to the work we are doing through our Minority Initiative Program and our outreach to women living with diabetes in African American, Hispanic and South Asian communities.

Finally, I was impressed with the stories shared by Sana Ajmal (Pakistan), with focus on The perspective of young women in the developing world. Ms. Ajmal anecdotes reinforced why the work we do for women living with diabetes is necessary beyond the United States. Too often, we have heard that diabetes hinders our lives, it makes many of us feel “broken”, and we become disempowered. It is our responsibility to reverse these feelings, to educate women to become leaders of their healthcare and dispel the myths and conceptions of life with a chronic disease.

Special thanks to the staff of the International Diabetes Federation; their efforts to produce an incredible experience was surpassed, and to the United Arab Emirates and the city of Abu Dhabi, who welcomed the Congress delegation with open arms, beautiful sites and rich history.

I was provided a Media Pass to attend the International Diabetes Federation Congress, which enabled me to attend all sessions. All opinions and posts, however, are my own. Please search #idf2017 in the @DiabetesSisters Twitter feed to see more posts during our time in Abu Dhabi.