Tonight I went to dinner with my family at our favorite Mexican restaurant.  The restaurant is in an old mall.  It is the kind of mall where most stores are boarded up and only a few are in use.  The most action the mall sees is from mall walkers and the people eating at the restaurants.

While we were eating, my husband saw a man walking a miniature horse through the mall.  We thought that maybe they were having a petting zoo or something.  Because the mall is not home to many stores they often host car shows, fairs, and other attractions there.

After dinner, we went off in search of whatever event the horse was attending.  We thought it would be fun to show it to our daughter.  But, we didn’t see a petting zoo or anything of the sort.  Eventually we saw the miniature horse and its handler in a furniture store.  I noticed it was wearing a service vest.  My curiosity was peaked.  I tried to  nonchalantly wonder near the horse in an effort to hear what the handler was saying to the people behind the counter in the store.

Apparently he was not a handler at all, but the horses’ owner.  He has type 1 diabetes and is training the horse to detect his low blood sugars.  In fact, when he was talking the horse kept nudging his hand and he said, “See he just told me I am low.”

I was so excited!  I don’t often see diabetes in “the wild”.  It is not a disease that is obvious in everyday life.  I always get excited when I see someone with a pump clipped to his or her pants.  Imagine my elation when I met this guy.  I do not normally approach people I see with pumps.  I just secretly get excited that I spotted someone “like me”.  But, I could not pass up the opportunity to introduce myself to this guy.

I found out that he is unable to detect his low blood sugars until they are in the 20’s, so he has had service animals for years.  He had already gone through 2 service dogs.  His last dog is retiring, so he thought he would try a miniature horse because they live longer then dogs and are extremely smart.  I have heard of and seen service dogs before, but had no idea you could train a miniature horse to detect low blood sugar (note: I know nothing about service animals so I cannot attest to the validity of this.  I am just relaying what this man shared with me.)!  I thought it was really cool and my daughter loved seeing the little horse.

Of course after we parted ways, I thought of 1,000 questions I should have asked him.  Like, how does he transport the horse?  My husband assured me he probably has a van.  Can you house train a horse?  I haven’t a clue, but sure hope so. 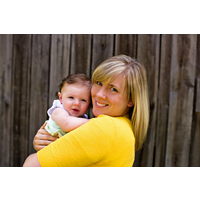 Username:
mflint
Gender:
female
Diabetes Type:
Type 1
Diabetes Treatment:
Insulin Pump / CGM
Occupation:
Human Resources
Number of Children:
1
City:
Graham
Country:
United States
Email:
markeeflint@yahoo.com
About Me:
I am a new mother of a beautiful baby girl who is trying to figure out how to juggle work, motherhood, and diabetes.