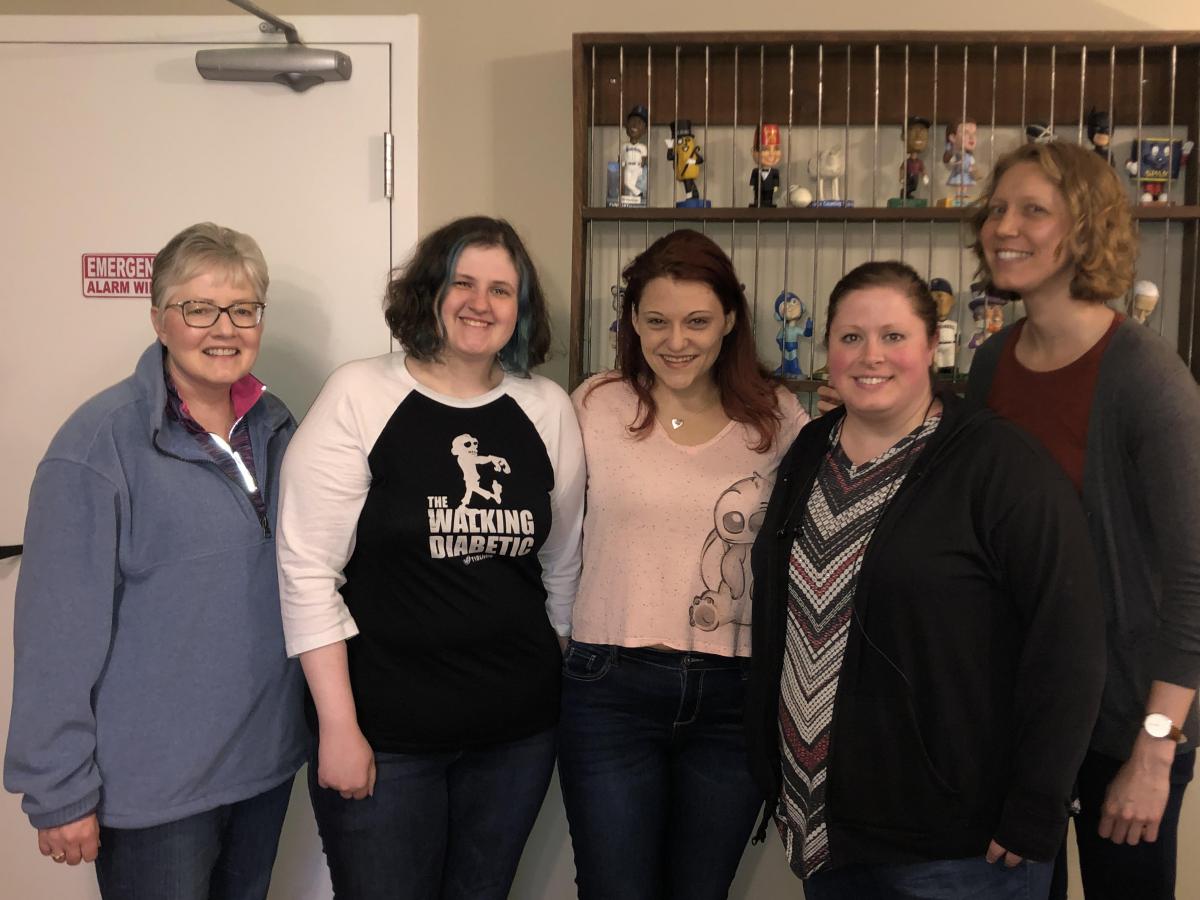 Erin M. Akers loved DiabetesSisters since she first “met” the organization through a Weekend for Women conference in 2011. There, she got a chance to really see the immense difference DS was having in women's lives who lived with diabetes. After a few years of attending DS events and then appearing as a guest speaker, Erin knew that she wanted to be more involved with DiabetesSisters' specific mission of helping all women with diabetes. She notes: “I really liked that their mission was about bringing us together by focusing on the struggles and victories we all had in common, rather than separating us into types.”

After seeing the bonds and sisterhood among PODS Leaders who were attending the DiabetesSisters Leadership Institute in Fall 2017, Erin knew she wanted to be a part of that leadership. Her close friend Sarah MacLeod is a PODS Leader for the Boston/South Shore location and had encouraged Erin for years to start a PODS Meetup in Seattle. Erin requested the information about starting a new PODS, and DiabetesSisters of Seattle began in May 2018.

The Seattle PODS Meetup averages 4-5 women, but often sees 8-9 attendees at the monthly meetings. Diabetes technology, tricks to help lessen malfunctions, and new cool places to put insulin pump sites/pods or continuous glucose monitor sensors, are all major topics that come up a lot. The group also talks about emotional side effects of diabetes at almost every meeting: burnout or anxiety around low blood sugars; the rollercoaster of low-high blood sugars; or trying something new with diabetes management. They have also discussed the cost of insulin/supplies a lot - the logistical realities and cost of going to Canada to buy insulin vs. trying to get it at a US pharmacy. Traveling with diabetes comes up quite often: logistical extras that people with diabetes should think about; amounts of extra diabetes supplies one should bring; and tips from each other’s experiences traveling, such as TSA allowances for an extra bag of medical liquids/supplies. (That suggestion eased a lot of anxiety for one PODS member when traveling to Europe for the first time.)

Several PODS members went to a JDRF Type One Nation conference in Seattle together in 2018. In December, they made health-focused New Year’s resolutions together so they could help keep one another accountable. One of the PODS members helped members who made resolutions to move their bodies more, get together for bouldering at a local climbing gym. But climbing isn't for everyone, so another group of PODS members goes to local outlet mall for a day of marathon sale-hunting and poké bowls. As someone who participates in both activities, Erin is not actually sure which one gets more cardio-intense. Often PODS members will break off and get food together after a meeting - ladies who bolus together, brunch together.

Erin sees many examples of peer support and community in the PODS group. A few months after starting DiabetesSisters of Seattle, she presented at a large diabetes summit in Seattle. She was really nervous about presenting, but when she looked into the crowd and began to speak, she saw 3 dSisters waving at her from the front of the audience. It was a really moving for Erin to see that kind of support from PODS members she had met quite recently.

DiabetesSisters of Seattle PODS member Lacey agrees. “When my mother died over a year ago, I lost my biggest supporter. It hurt every time I went to my endocrinologist and couldn't update my mom on my progress. She was always there through every step of my diabetes journey. The PODS meetups have helped to ease some of the loneliness I've felt since losing her. Now I have people who get it when I have to sit down and shove a bunch of fruit snacks in my mouth during a long shopping trip, and who listen to me complain about a day of wacky blood sugars. I've made wonderful friends who understand my diabetes, and most importantly? They understand me. I've lost my mom and that will always hurt, but I've gained an awesome community.“

For Erin, “DiabetesSisters has created a true sisterhood. It's easy living with diabetes to feel isolated and alone. Even with the internet and the amazing Diabetes Online Community, I don't want to talk about some things online in front of the whole world. There is something different about sitting alongside a person who can reach out and grab your hand when life feels rough and the journey is rocky. Watching my dSisters who were really shy at the beginning of the PODS group start to form friendships that are strong, lasting, and built on bonds of battles they have survived feeds my soul. Getting diagnosed with diabetes makes you instantly part of a club you'd never ask to join, but the community you join and build makes it worthwhile to stick around. DiabetesSisters makes that especially true!”

Since 2010 the Part Of DiabetesSisters (PODS) Meetup program has offered monthly support to women living with any type of diabetes or prediabetes, and provided a nonjudgmental place to discuss the successes and challenges of living with diabetes. Led by women lwho live with diabetes, the groups offer true peer support focused on women and diabetes. The PODS Meetup Program reaches more than 1,300 women annually, in person (in 22 states) and online (members meet via computer cameras from the comfort of their own home). Women age 18 and up, living with any type of diabetes or prediabetes, are invited to attend PODS Meetups. If you would like more information on local PODS Meetups near you, or starting a group in your community, please complete the PODS Meetup inquiry form – we look forward to hearing from you!